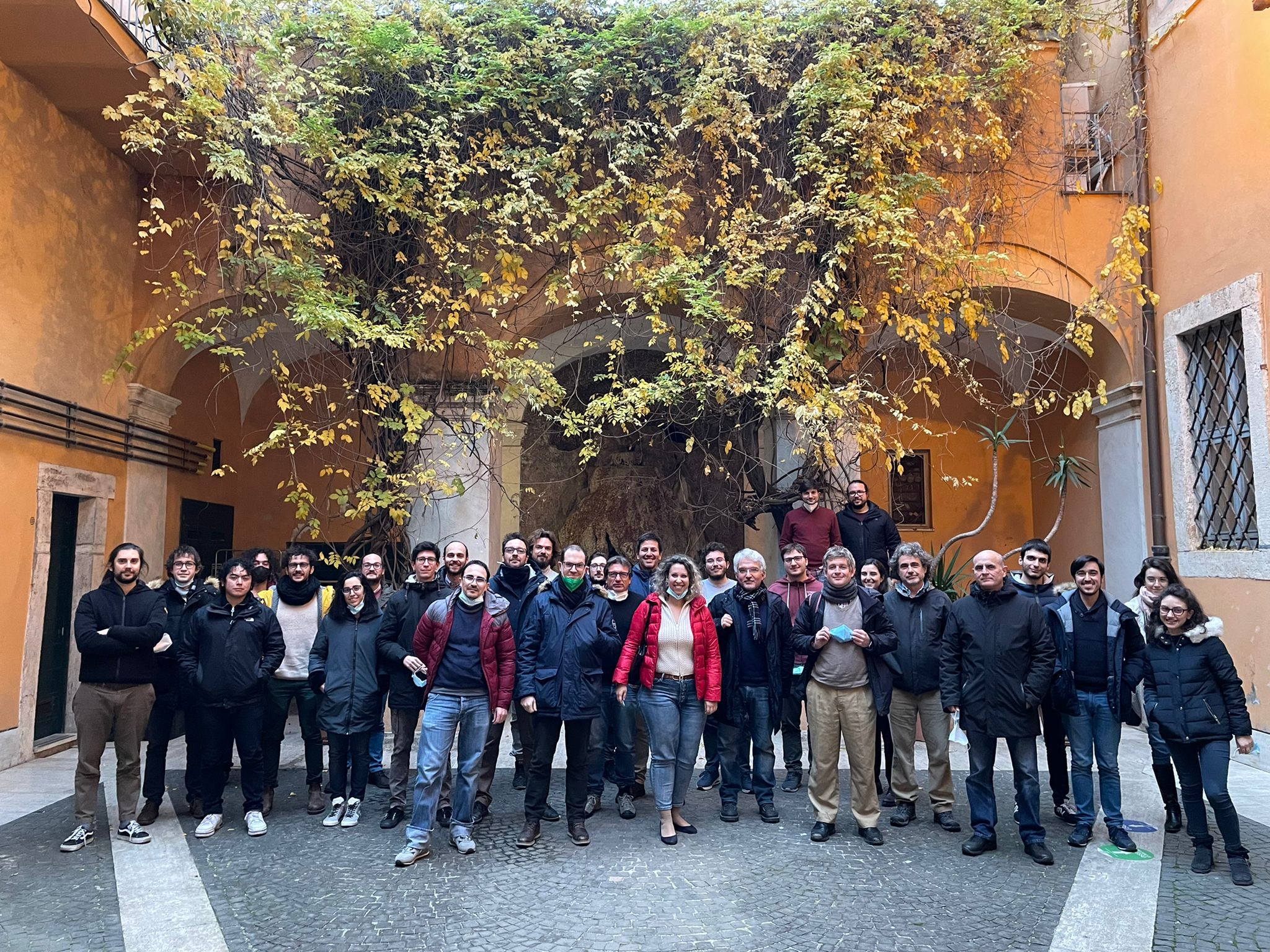 Abstract: Let \(X\) be an irreducible and reduced projective hypersurface and \(P\) a point. A consequence of the Castelnuovo’s uniform principle is that the projection from a general point has symmetric monodromy group. We will say that a point is non uniform if the associated monodromy group is not symmetric. We prove that the locus of non-uniform points is contained in a finite union of linear spaces of codimension at least 2 and it is finite when \(X\) is smooth or a general projection of a smooth variety. Moreover we prove that a general hypersurface does not admit non uniform points. This is a joint work with Riccardo Moschetti and Alice Cuzzucoli.

Abstract: After Yau’s proof of the Calabi conjecture in the 80’s, the Monge-Ampère operator played a central role in geometric problems, such as the existence of special metrics on a compact Kähler manifolds. In fact, it turns out that solving a complex Monge-Ampère equations is equivalent to the existence of a Kähler-Einstein metric. In the "smooth" case (when the manifold is smooth) we have a complete picture: we know the obstructions and we have existence and uniqueness results as well. The "singular" case is much more complicated and still in development. In this talk I will especially emphasise how pluripotential theory is a good tool to look for singular Kähler-Einstein metrics.

Abstract: During the last decades, moduli spaces of sheaves on K3 surfaces have been intensively studied. If we replace the K3 surface with a higher dimensional hyperkähler manifold much less is known, but recently O’Grady showed that for a certain class of sheaves there exists a good wall and chamber decomposition of the ample cone, in analogy with the case of K3 surfaces. It turns out that such class of sheaves is closely related with projectively hyperholomorphic vector bundles introduced by Verbitsky, whose corresponding moduli spaces are singular hyperkähler. In this talk I will first recall all the notions involved in order to provide a proof of another analogy with the K3 case, namely extending the Kaledin-Lehn formality conjecture to projectively hyperholomorphic vector bundles on a hyperkähler manifold of arbitrary dimension. In particular, we recover a quadraticity result due to Verbitsky and a smoothness result due to Kobayashi. This is based on a joint work in progress with Claudio Onorati.

Abstract: I will start by discussing different constructions of compactified Jacobians for families of nodal curves. The combinatorics under some of these constructions lead naturally to tropical analogues of the algebraic objects. We will describe such objects, called tropical Jacobians, along with a treatment of their modular properties. We then show how to realize intrinsically tropical Jacobians as “tropicalizations" of algebraic compactified Jacobians. This sentence will be made precise in two settings: non-archimedian and logarithmic geometry. The talk will be partially based on joint work with S. Molcho, M. Ulirsch, F. Viviani and J. Wise.

Abstract: We give a construction of rank 4 stable modular vector bundles on polarized hyperkhähler varieties of type \(Kum_2\), provided the polarization has divisibility 2 and square congruent to -6 modulo 16, or divisibility 6 and square congruent to -6 modulo 144. We expect that, up to isomorphism, there is no other stable vector bundle with the same rank, \(c_1\) and \(c_2\) on the generic polarized hyperkhähler variety as above. (This is work in progress.)

Abstract: Given a smooth cubic fourfold, there exists an associated intermediate jacobian fibration over the locus of smooth linear sections. The total space of the fibration carries a closed and holomorphic non-degenerate 2-form and, by a recent result of Saccà, it always admits an irreducible and symplectic compactification that is deformation of the so-called OG10 manifold. A natural question arises: when is such a compactification unique? I will present an answer to this question assuming that the compactification satisfies two additional properties, and I will use this example to talk about a joint work with G. Mongardi on the birational geometry of irreducible holomorphic symplectic manifolds of type OG10.

Abstract: Given a smooth algebraic variety \(X/k\), its (Bloch-Ogus-Rost) unramified cohomology \(H^i_{nr}(X,D)\) with coefficients in a torsion Galois module \(D\) is the subgroup of \(H^i_{et}(k(X),D(i))\) given by the elements whose residue at each codimension one point is zero. When \(X\) is proper, this group is a birational invariant and it being non-trivial disproves stable rationality. It was first used in this way, in the form of the unramified Brauer group, by Artin⁠–Mumford and Saltman, and then in higher degrees by Colliot-Thélène⁠–Ojanguren. In degree 2, unramified cohomology computes the prime-to-\(\mathrm{char}(k)\) part of the cohomological Brauer group. There is a natural equivariant extension unramified cohomology to smooth quotient stacks, and in fact this can be shown to be a sheaf in an appropriate Grothendieck topology and extended to arbitrary algebraic stacks. Unfortunately, it's easy to see that even for smooth, projective Deligne-Mumford stacks unramified cohomology is not a birational invariant. One way to see this is that while any birational map between smooth proper schemes is given, at least in \(\mathrm{char}(k)=0\), by a sequence of blow-ups and blow-downs, which leave unramified cohomology unchanged, for DM stacks we have to add root stacks, which can modify it rather drastically. I will describe recent work with Andrea Di Lorenzo in which we find a formula to describe the unramified cohomology of a root stack and use it to show that different natural compactifications of the moduli stacks of Hyperelliptic curves, while being seemingly almost identical, have vastly different unramified cohomology.

The conference is supported by the project PRIN2017SSNZAW: “Advances in Moduli Theory and Birational Classification”, whose principal investigator is Prof. Lucia Caporaso.

We thank the Department of Architecture of the University Roma Tre for the use of the Aula Urbano VIII.